Capital Rotary Club president David Boucher did not think of himself as a long-distance runner when he took up jogging 25 years ago – but now he has circled the globe by completing 24,902 miles (the circumference of the earth) on daily three-mile stints downtown. It’s fitting that Boucher celebrated his last ‘round the world lap in March during the Rotary District 7770 conference at the Columbia Convention Center.  Not only did he run the distance, but he also celebrated the last 900 miles by raising money for Rotary’s CART Fund for Alzheimer’s research. Using his Facebook page and club announcements, Boucher solicited sponsors at a penny-per-mile for the 900 mile finish. He’s also collected change off the streets while jogging for the past year-and-half in Columbia – a total of $68.86 in coins of various denominations.  This money, too, was donated to CART, and Boucher invited Capital Rotarians to match it by contributing $68.86 on their own. The overall donation goal was $10,000.  As of late March, Boucher’s efforts had brought in more than $7,000 with additional checks to come.  The CART Fund – Coins for Alzheimer’s Research Trust – was started by a Rotarian in Sumter County in 1999 and has been adopted by many clubs since that time. One-hundred percent of the money collected is used as seed money for cutting edge research to find a cure for Alzheimer’s disease.  CART has provided over $5 million in grants since its founding. 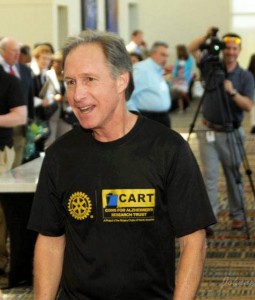