Our speaker at our meeting Wednesday, June 8th was Senator and former Lt. Governor John Yancey McGill – a native of Kingstree, South Carolina. Yancey McGill was formerly a Democratic member of the South Carolina Senate, representing the 32nd District in Williamsburg and Georgetown counties from 1989 to June 18, 2014. McGill became Lieutenant Governor after Glenn McConnell resigned to become president of The College of Charleston, becoming the first Democrat to hold the office since 1995. McGill chose not to run for election to a full term, in November 2014; Republican Henry McMaster therefore succeeded him as Lieutenant Governor on January 14, 2015, having won the November election.  In January 2015, McMaster appointed McGill to be the State Director of South Carolina’s Office on Aging.  He stayed at the position for 8 months before returning to his family farm in Kingstree.   In March 2016, McGill left the Democratic Party and announced his intention to run for Governor of South Carolina in 2018 as a Republican. He had been a fairly conservative Democrat for most of his career; he opposed abortion and supported curbs on government spending and regulation. He admitted that he hadn’t changed parties sooner because his state senate district was too Democratic for him to be elected as a Republican. 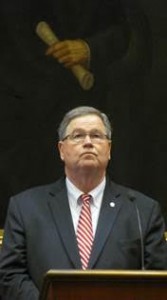