Daniel Winders (left) is welcomed by sponsor John Guignard after induction into Columbia’s Capital Rotary Club. Winder, a native of Hickory, NC and a graduate North Carolina State University, is an HVAC sales engineer with Johnson Controls, Inc. Winders is a member of the South Carolina Mechanical Contractors Association and has been active in the state chapter of the American Society of Heating, Refrigerating and Air-Conditioning Engineers since 2011. He traveled to Prague in the Czech Republic as part of NC State’s study abroad program in 2008.

Ross Oakley (left) is congratulated by Capital Rotary past president Scott Wallinger upon becoming the Columbia club’s latest Paul Harris Fellow in acknowledgement of a $1,000 contribution to the Rotary Foundation. Oakley, a Beaufort native and project manager for Thomas & Hutton Civil Engineering, is a graduate of the University of South Carolina. He’s also a member of the S.C. Economic Developers Association, the Urban Land Institute and the Building Industry Association of Central South Carolina. Donations to the Rotary Foundation help fund international programs that promote world understanding and peace. 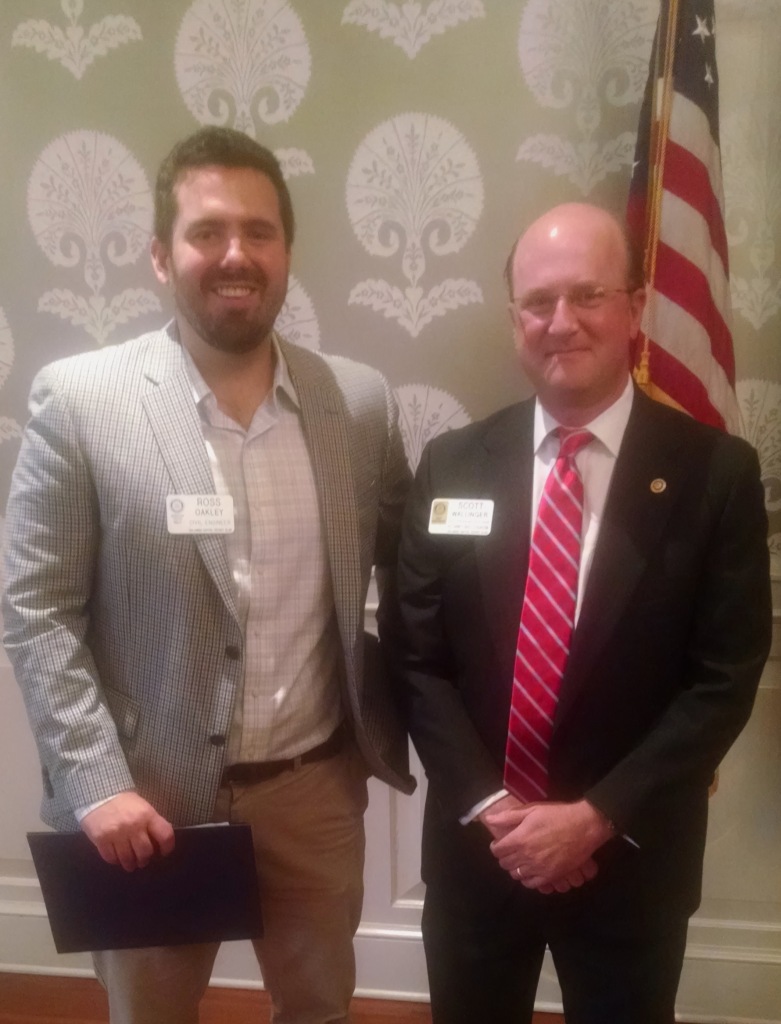 Columbia’s Capital Rotary Club members showed they “have a heart” in February by volunteering at Harvest Hope Food Bank.  Nearly 20 Rotarians helped pack groceries for distribution to the needy and elderly in lieu of a weekly club meeting.  Bagging donated soft drinks are (in background from left) Blake DuBose, Jay von Kolnitz, Mark Bokesch, Trey Boone, John Guignard  and Ann Elliott, along with (foreground left) Ione Cockrell and Denise Holland (foreground right).  Harvest Hope is headquartered in Columbia but works to meet the needs of hungry people in the Midlands, Pee Dee and Greater Greenville regions of the state.  It feeds more than 35,000 people weekly.


Michael Glover (center), the newest member of Columbia’s Capital Rotary Club, was inducted by president Mark Bokesch (left) and sponsor Bryan Goodyear at a recent meeting. A retired insurance executive, Glover is a licensed charter boat captain and guide specializing in striped bass fishing on Lake Murray. He is a native of Winnsboro and a University of South Carolina graduate who worked for Blue Cross Blue Shield and Colonial Life before beginning his outdoors career. He’s been a board member for the Free Medical Clinic and a Habitat for Humanity volunteer, is married and has a grown daughter. 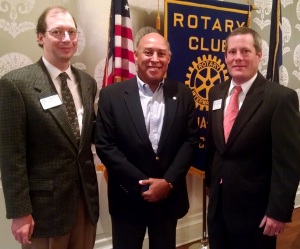 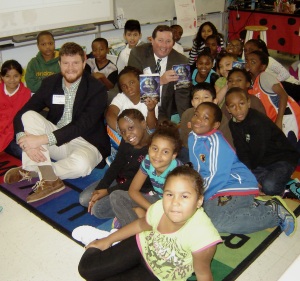 Capital Rotary Club members John Guignard (left) and Jenks Mikell (center) huddle with third-grade students at Arden Elementary School after distributing paperback dictionaries as part of the club’s annual participation in The Dictionary Project. The project, begun by a non-profit organization in Charleston in 1995, aims to help students become good writers, active readers, creative thinkers and resourceful learners by providing them with their own personal dictionary. Capital Rotary donated dictionaries to 840 students in 12 Richland County District One schools for 2014-15. Over the past 10 years, the club has purchased and given dictionaries to 10,500 third-graders in the Columbia area. A number of clubs in South Carolina and throughout the country are Dictionary Project sponsors. One of Rotary International’s six major goals is improving basic education and literacy.

Though still in start-up stages, Nephron represents a $313 million investment and presently has

over 100 employees. It will manufacture and distribute respiratory products, eye drops that

periodically tours various points of interest throughout the community.

Adam Dougherty has been named 2014 Rotarian of the Year by Columbia’s Capital Rotary Club.

June 25th. The award recognizes dedicated service and loyal devotion to the ideals of Rotary.

South Carolina. He is a territory manager for the John Deere construction and forestry lines at

Dougherty and his wife, Haley, have been married for 10 years and have three children.

meeting the needs of hungry people in the Midlands, Pee Dee and Greater Greenville regions of

The contribution was spearheaded by Rotarian Ione Cockrell, following a visit by Harvest Hope

Harvest Hope began as a Columbia-area undertaking in 1981. Since then it has expanded to give

food, comfort and hope to those affected by poverty and hunger across 20 counties. The food

of food last year and fed approximately 38,000 people a week.

School, part of the club’s annual participation in The Dictionary Project.

them with their own personal dictionary.

schools for 2013-14. Over the past nine years, the club has purchased and given dictionaries to

A number of clubs in South Carolina and throughout the country are Dictionary Project sponsors.

One of Rotary International’s six major goals is improving basic education and literacy.