Our speaker on Wednesday morning, August 12th was Mr. Jason Freier, Chairman & CEO of Hardball Capital, Inc. and Columbia Fireflies (www.ColumbiaFireflies.com). Under his leadership, Hardball has built the Fort Wayne TinCaps into one of the premier teams in Minor League Baseball and drastically improved the performance of both the Savannah Sand Gnats and the Salem Avalanche. Hardball has set all-time attendance records with every team it has owned and operated. Hardball recently led the acquisition of the Chattanooga Lookouts and is currently constructing a new, downtown, multi-use venue in partnership with the Famously Hot City of Columbia, South Carolina.  That venue, which will open in 2016, is part of a major downtown redevelopment project. Jason is a graduate of Harvard College and Yale Law School, where he was elected to the Yale Law Journal.  Jason is an attorney by training. Prior to founding Hardball, he specialized in complex business matters and sports law, appearing in courts at all levels, including the U.S. Supreme Court. Following law school, he worked with former Solicitor General and Harvard Law Professor Charles Fried and practiced with Williams & Connolly in Washington D.C. and Bondurant, Mixson & Elmore in Atlanta. Jason’s work has been featured in national publications and Congressional legislation. Jason serves on the Board of Directors of the Southern, Midwest and South Atlantic Leagues. He is a member of the Advisory Boards of Thuzio and Palmer & Cay. Jason previously served on the Board of Directors of the Carolina League. Jason is an appointed member of the Fort Wayne Stadium Advisory Board and an officer of the Harvard Club of Georgia.

Columbia Capital Rotary member Ione Cockrell was among the donors who gave 67 units of blood at the club’s annual summer blood drive in Columbia. The Red Cross estimates these donations will help to save up to 201 lives as the club achieved 110 percent of its goal. 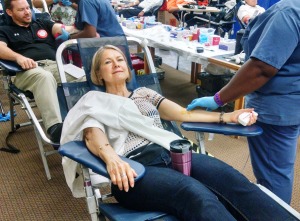 Capital Rotary’s Bryan Goodyear (right) receives the 2015 Rotarian of the Year award from president Mark Bokesch in honor of outstanding service as membership chairman. Under Goodyear’s guidance, the club admitted nine new members for 2014-15, one of its best years on record. 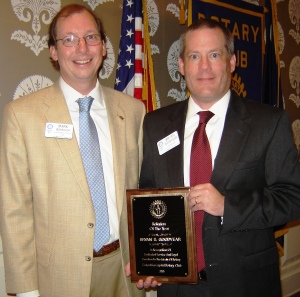 David Boucher (left), incoming president for Capital Rotary Club in Columbia, presents a gavel and plaque to outgoing president Mark Bokesch. Under Bokesch’s leadership in 2014-15, the club was able to award $13,000 in college scholarships and made significant charitable contributions to Harvest Hope food bank, to the worldwide Polio Plus disease eradication effort, to a water mission project in Ecuador and to grants that support Alzheimer’s research.

New Capital Rotarian Ben Carlton (center) is welcomed into club membership by president Mark Bokesch (right) and sponsor Bryan Goodyear. Carlton, who practices corporate law with the Columbia firm of Richardson, Plowden & Robinson, is a graduate of North Carolina State University and the University of South Carolina’s Law School, where he was associate editor in chief of the Law Review. Carlton is an Eagle Scout and serves as a regional selection committee member for NC State’s Park Scholarship. He’s a member of the SC Bar and the Young Lawyers Division, plays in the Columbia Tennis League and received a “Key to the City” of Hickory, NC, where he grew up. 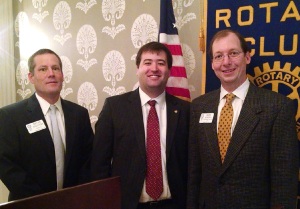